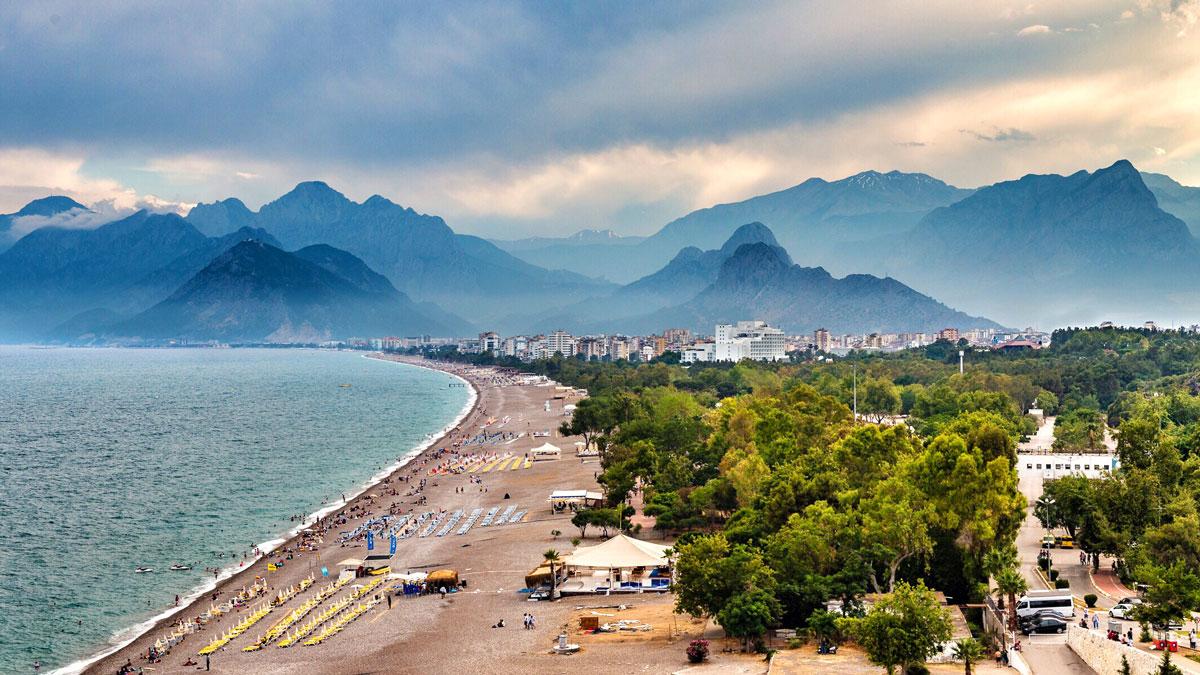 Originally called Attalia, Antalya history goes back to 150 BC when it was founded by the king of Pergamon Attalos II. It has been visited by very famous missionaries and travelers like Paul the Apostle, Ibn-e-Battuta among many others. The city served as the main harbor for the surrounding areas in the reign of Seljuks and a perfect multi-cultural community of Muslims, Christians, and Jews. It is a beautiful coastal area with beautiful beaches, and mind-blowing ancient ruins attracting millions of tourists every year since the 1970s. Antalya is one of the major holiday resort located in the Mediterranean region.

The city is built around the Roman era harbor with the mountains around providing a perfect background to hazy blue Sea. It is lined with shady palm trees and marina on the Mediterranean. The modern part of the city is built around the old Antalya city with Kaleici square as its center. It has narrow winding streets with old Ottoman wooden houses that are well preserved and are mostly owned by foreigners. In the past, Antalya and its golden beaches attracted German and Russian nationals and it was considered a popular destination. Because of this reason, the population of the city spikes to around 2.8 million specifically in summer times.

The city was founded in 150 BC by Attalus, a king of Pergamon, and the city was named after him that is famously known as "Attaleai". Antalya was ruled by Romans, Byzantines, Seljuk, and Ottomans. There are many monuments and relics like Yivli Mosque, Olympus Temple, and many more. The city was recognized and promoted as the major tourist hub after the War of Independence. It has now become the main attraction in Turkey and around 40% of tourist enter Turkey through this city.

The region of Antalya is blessed with astonishing natural beauty with historical remains. You can enjoy and thrilling experience at Upper Duden Waterfall only 14 km northeast of Antalya. Similarly, the waterfall is connected with Lara Beach, one of the most famous beaches of the region. There are many more beautiful waterfalls and lakes in surrounding areas like Kursunlu Waterfalls and Nilufer Lake. It also has famous Bey Dagi National Park (Olympos National Park) providing a splendid view. These places are not far from the city centre and can easily be visited.

The city is not only the popular destination but it is also an ideal winter sports resorts because of its vicinity to Bakirli Mountains. The mountains stand tall at 1750-1900 meters providing perfect slope to enjoying skiing in March and April. You can sunbath at Antalya marina, surf in afternoon and ski in the mountains. Antalya is also close to ancient relics which dates back from the Paleolithic Age (50,000 BC). The settlement is the oldest in Turkey housing artefacts from various museums across Turkey. One of the best Museums is the Archaeological Museum offering a glimpse of the areas rich history.

Antalya has a perfect blend of summer and winter season and one of the best Mediterranean coastal city. Do you want to enjoy the diverse and culturally rich city? Do you want to see the relics from the Roman, Hellenistic, and Ottoman era? Are you curious about, let us know!! TRANIGO provides all solutions to travel solutions to enjoy your relaxing trip. You can get your guided tour to visit all the sights without missing anything.