Nantes is city in Loire Atlantique around 50 km from the Atlantic coast. It is the sixth largest city in France with a population of around 300,000 people. Nantes happens to be neart a seaport on the Loire estuary making it a north western French metropolis. The city historically and culturally belongs to Brittany, a former province.The Loire is Nantes lifeblood bringing the world to the city's doorstep.

The city boasts unique architectural heritage throught the magnificent Chateau des ducs de Bretagne Castle. This castle is a Renaissance style castle that goes to medieval quarter. The city now has been transformed to a vibrant and young metropolis and is known for top-quality of life. Nantes is also known as Green Capital of Europe and has a set high standard for the other cities in France.

The 19th century Passage Pommeraye is a master piece with a glass roof that was designed in 20th century. This Station Prouve has been built by Jean Nouvel has 18 gigantic rings of Daniel Buren (les anneaux). It is on the lively Quai des Antilles and is situated on the banks of the Loire. You can enjoy the panoramic terrace from the 32 floor of Tour de Bretagne. You can discover the Estuaire Nantes Saint-Nazaire art trail. Runned by Le Voyage a Nantes and has a collection of 30 artworks created by renowned artists.

Nantes is more than beautiful places as it also offers tasty and diverse local seafood. You can enjoy seafood from langoustines to oysters served with fresh vegetables, and other delicacies. You can enjoy the local cuisine and the Muscadet wine from the vineyards.

Are you excited about the place and planning a trip to this beautiful city? Are you confused about how to move around this metropolitan city? Well, we have the perfect solution for your travel needs like Nantes Airport shuttle, Nantes Airport taxi, Nantes Airport transfer services to and from Nantes Airport. Similarly, if you want Nantes transfer to any point in the city, TRANIGO is the answer to all your Nantes airport taxi service needs.

Wherever you go, Go with TRANIGO!! 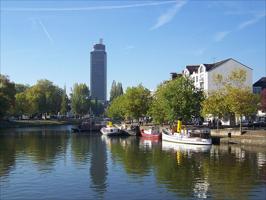